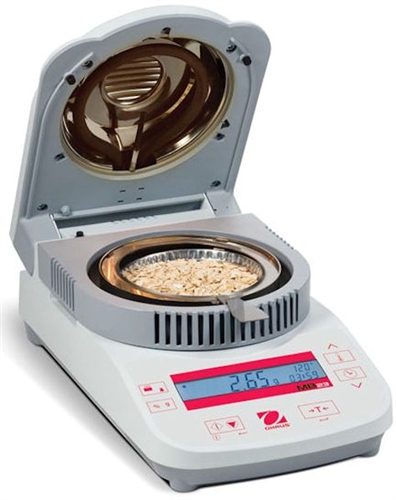 Similar to most recent inventions in the technical world of science, a new addition of rapid moisture and moisture balances has made the existing range of technologies far more interesting and meaningful than before. To start with, rapid moisture analyzers also known as moisture balances are extremely vital as equipment in the pharmaceutical and clinical world. This is because it is specialised to determine the moisture content of a sample which is a common task in these fields and also general research (academic) oriented fields. Many scientists or employees make this simple mistake of not knowing every instrument and equipment to their depth which can hinder their day-to-day function and application.

Rapid moisture analyzer and balances work on a simple principle of—Loss on Drying. This principle states that if a given sample is quantified for the moisture content, it will be dried in the drying chamber of the analyzer and the device will automatically calculate the difference between the initial (wet) weight and final (dry) weight which is essentially the moisture content of the sample. It is however important to know beyond just this working principle, including variants as discussed below.

Depending on a few selection criteria, rapid moisture analyzers and balances can be of the following variants. This information will be helpful to draw a comparison between variants when buying a moisture analyzer.

Within the rapid moisture analyzer and balances, there is a heating pattern that is operated for the successful heating of a given sample. The two modes are—low heating and high heating modes. The selection of these modes is based on the requirement of your work or the tolerance level of your specimens. For models with single temperature control, there is either of these two modes which operate the heating program. In the case of a dual system, both the features can be present and active during a heating program.

Depending on the nature of specimens and samples you are working with, you can choose rapid moisture analyzers designed especially for the given specimen. This category has been introduced keeping in mind that every specimen varies in its chemical nature, melting and boiling point, durability, and interaction with other chemicals. Hence, it is important that you use the appropriate source of temperature for a sample. Broadly, there are two sources—Infrared (IR) and Halogen lamps that are installed within the moisture balances. While the former is used for samples with low heat tolerance, the latter is used for those with a high level of heat tolerance.

You can regulate the temperature of an analyzer in several limits. You can also alternatively heat a batch of specimens and let them cool for some time before heating them again. Many specimens require a few rounds of heating before the moisture content can be determined. So, instead of keeping the temperature to the same limit, you can change it and let the specimen be intact as well. Low heating modes can be operated within a limit of 60 to 120 degrees Celsius. In the contrary, high heating modes operate in a wider range like 150 to 200 degrees Celsius. You can find variants that have either of these ranging limits as per your purpose and requirements.

Rapid moisture analyzers can come in very handy if you are running your own or working in any pharmaceutical lab or clinical organization. You should also be aware of the timely calibration rounds of this device because the accuracy of an analyzer determines any downstream result or work outcome. Therefore, you have to make sure that your moisture balances are working perfectly fine and are delivering accurate results. You can also try to calibrate yourself without professional help by selecting two identical standard specimens. Test one in the analyzer and get the data. Test another one in a calibrated electric weighing machine and do the before and after calculation yourself. If both the data are not divergent to a great extent, your analyzer is perfectly calibrated.