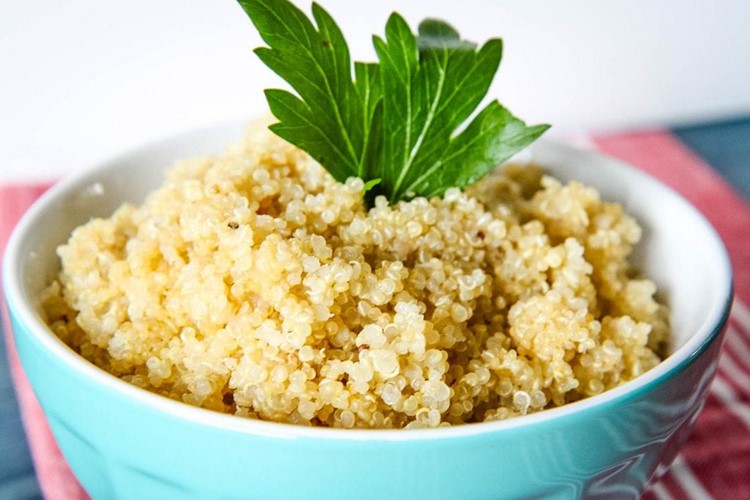 Quinoa, on the other hand, is a high-nutrient grain that outperforms others. Quinoa is a nutty grain with a crisp texture. It’s also gluten-free, so it’s safe to eat if you’re allergic to gluten or wheat.

Quinoa seeds are flat, oval-shaped, and usually pale yellow in colour, though they can range from pink to black in colour and have a bitter to sweet taste. It’s often used as a celebratory dish, morning porridge, salad dressing, and soup thickener.

The seeds can be grown, pulverised, and ground into flour, or popped like popcorn. Quinoa is a safe food for babies to eat. Because of its potential to contribute to global food security, the United Nations designated 2013 as the International Year of Quinoa. Despite the fact that it is not strictly a fibre, quinoa is recognised as a “whole grain” food.

Quinoa seeds contain a variety of nutrients, which are listed in the table below.

Quinoa contains more magnesium, iron, fibre, and zinc than many other cereals, and has a high antioxidant and mineral content.

The major vitamins and minerals found in quinoa are listed below:

Manganese: Whole grains are high in this trace mineral, which is necessary for metabolism, growth, and development.

Phosphorus: This mineral, which is commonly found in protein-rich diets, is essential for bone health and the normal functioning of numerous physiological functions.

Copper is a mineral that is often lacking in the Western diet, yet is essential for heart health.

Folate: It’s one of the most powerful B vitamins, and it’s essential for cell and tissue growth.

Iron: A vital mineral that aids in the transfer of oxygen through red blood cells and other bodily activities.

Magnesium: It’s necessary for a variety of biological activities, yet it’s frequently missing from the Western diet.

Zinc: A mineral that is necessary for overall health and plays a part in numerous chemical reactions in the body.

Quinoa is a nutrient-dense grain that is abundant in minerals and plant compounds, making it a nutritious addition to any diet.

According to some research, including quinoa in one’s diet can boost overall nutritional value, lower blood sugar, and lower blood triglycerides.

Type 2 diabetics are unable to utilise insulin, resulting in excessive blood sugar levels and a variety of complications.

Whole grains (like quinoa) have been related to a lower risk of type 2 diabetes and heart disease, but processed carbohydrates have been connected to a higher risk.

Quinoa has been shown to mitigate the majority of fructose’s negative effects in rats fed a high-fructose diet, all of which are linked to type 2 diabetes. The quantity of cholesterol in the blood was reduced by 26%, the amount of triglycerides by 11%, and the amount of sugar in the blood by 10%.

Quinoa utensils were linked to gluten-free wheat diets in one human investigation. Heart problems, hypertension, and ED difficulties can all be treated with quinoa treatment, Fildena 100, Malegra 100, and Tadalista.

Bottom line: Quinoa has been shown to lower blood sugar, triglycerides, and cholesterol. It affects blood sugar levels less than other gluten-free foods.

May Help With Weight Loss

Quinoa has a number of characteristics that make it a good weight-loss food. It contains more protein than rice, corn, and whole wheat, among other similar foods.

Protein is one of the most important components in weight loss since it increases metabolism and satiety, which helps to prevent obesity and related disorders.

Despite the fact that quinoa has a low glycemic index, low-glycemic foods have been shown to reduce overeating and hunger.

Bottom line: Quinoa has a number of characteristics that make it a good weight-loss food. It has a low glycemic index and is high in protein and fibre.

Quinoa is a gluten-free pseudocereal that can help people who are gluten intolerant or allergic to gluten, such as those who suffer from celiac disease.

Bottom line: Quinoa seeds are gluten-free and are often used as a wheat alternative. They have been demonstrated to increase the nutritional and antioxidant content of gluten-free diets.

Quinoa is generally well tolerated, with no known side effects.

Quinoa, like the majority of cereals and grains, contains phytate.

Iron and zinc absorption may be hampered by phytate.

Quinoa is a Chenopodiaceous plant with a high oxalate content. Both beets and spinach belong to the same plant family.

Bottom line: Phytate and oxalates are found in quinoa, however it is easy to digest. In some people, they might obstruct mineral absorption, causing kidney stones to develop.

Quinoa contains a higher concentration of minerals and vitamins than most other cereals, as well as a higher quality protein content. It’s packed with vitamins, minerals, and plant compounds, and it has more antioxidants than cranberries! Quinoa seeds are gluten-free, may help reduce blood sugar levels, and are an excellent weight-loss food.

If you want to boost the nutritious quality of your diet, substituting quinoa for other grains (such as rice or wheat) is a smart place to start.